So, once upon a time I had babies. Little baby babies. Who had teddy bears, and rocking horses, and all the baby trappings of babydom. Before these babies were born, someone gave me a clock. The clock below. A very baby nursery clock, which we put in the babies’ nursery. Since that’s where the baby things went. 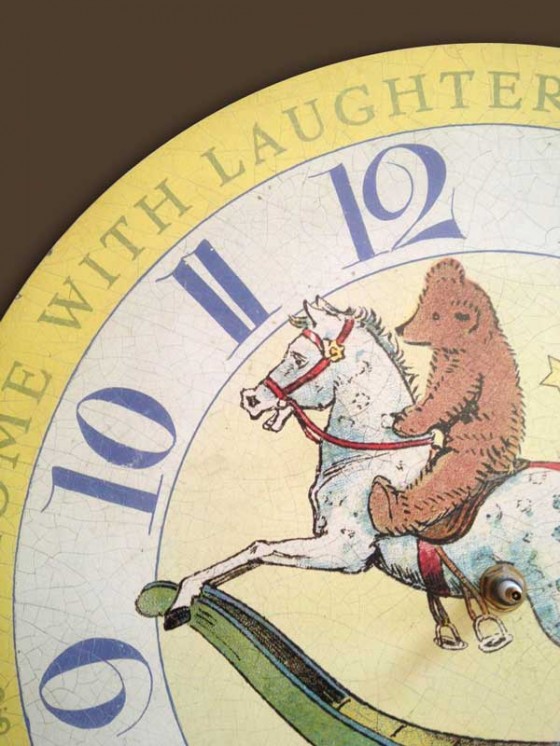 Over the years, weirdly, the babies have been growing up. And now there’s pretty much nothing left in our house that resembles anything that this clock represents. Not even in their room (they actually asked me to take this clock out of their room. So I hung it in the kitchen). Which means it’s probably time for it to go. Except I had gotten used to having a large, not-digital clock in the kitchen. So I decided, rather than get rid of it, I’d fix it and make it match our house better.

This was no small task. I’m nothing if not compulsive. And having the whole world of possibilities to choose from is about as overwhelming as it can possibly get for me. So I designed clocks for about 3 months. Maybe longer. Because apparently that’s how long it takes to design ALL THE CLOCKS. 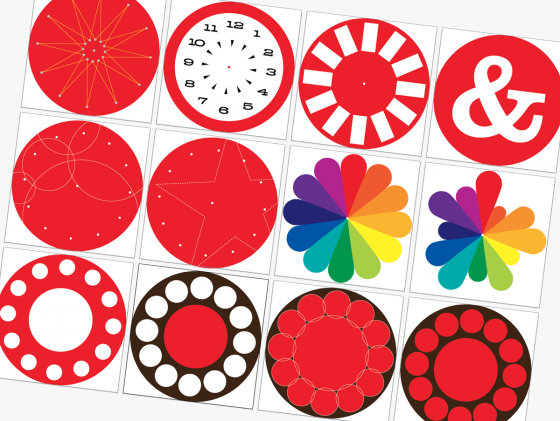 Eventually, I found myself veering toward certain looks and started refining the design and colors. I originally thought I’d be working mostly with red, as you can see above. Our kitchen has dark brown walls and I typically choose red stuff whenever I have to buy or make something for that room. So, red kettle, red dish drain, red Soda Stream, red silicone whisk, etc. But when I cut these designs out and put them on the wall, the red was too much. So I shifted to other colors that I like with brown.

Lo and behold, I actually chose a design!

But then I had to figure out how to make it happen. I was worried about the circles since it’s hard to make a perfect circle, let alone 13. And if they weren’t perfect, the clock would drive me crazy. Which meant trying to paint circles would probably put me on the fast track to crazy. While mired in puzzling this out, I decided to start prepping the clock itself. I figured if nothing else, that would motivate me to work through the puzzle as quickly as possible. 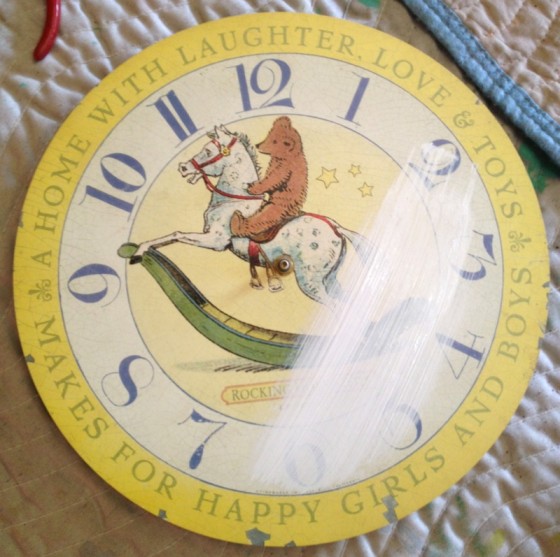 I wanted to be sure to cover all the old art completely so priming was important to enable a fresh start. I blew through this step, so I only have the tiniest portion photographed. Whoops. Needless to say, I completely covered the clock face with primer. I think I did two coats.

This was the fun part. I like mixing my own colors, so I started with a basic set of acrylic paints in blue, yellow, red, white, and black. The first blue I created was a little too dark, so I ended up painting about 4 coats. The hands of the clock are a little ornate — and brass — but I decided to stick with them and just painted them white. Also! The clock also had a pendulum. With an insert that continued the design of the clock. I ended up keeping the pendulum — painted it white — but got rid of the insert. So now it’s just an open circle, white, with the dark brown wall behind it. 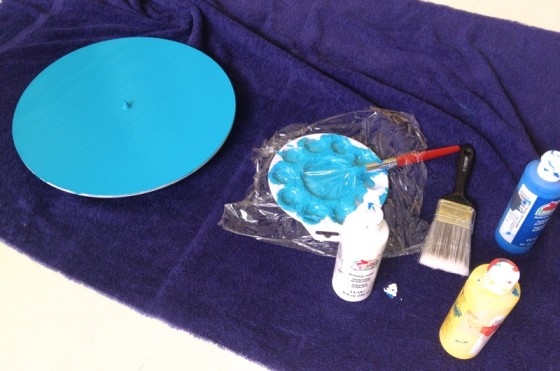 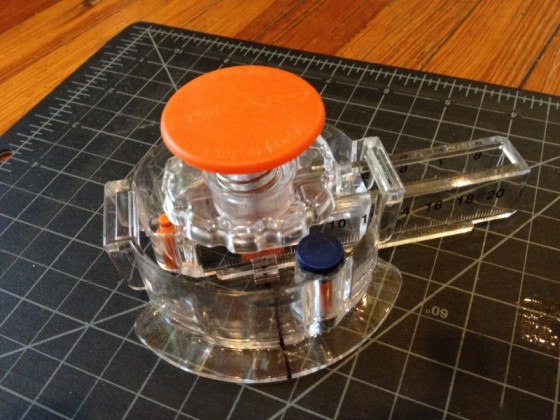 I ended up buying a Fiskars Circle Cutter which worked like a charm for creating the circles. For the large, white center circle, I just took a piece of heavyweight bright white paper (I love Epson Matte Presentation paper) and cut the circle out of the center. It was a little challenging to get the green number circles perfectly centered, but I eventually figured out a method that worked. I used the typeface ITC Blair which has great, clean, retro feeling numbers. 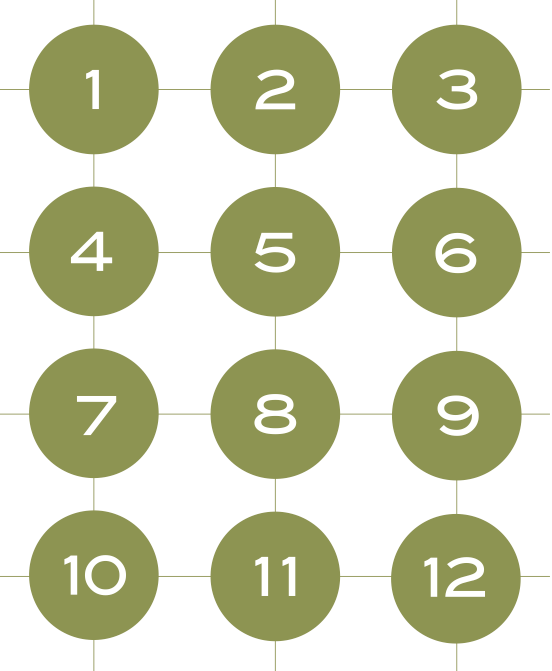 I applied all the circles with Mod Podge (on the backs and the fronts) and then, when it was all dry, I Mod Podged the whole clock face. Twice. 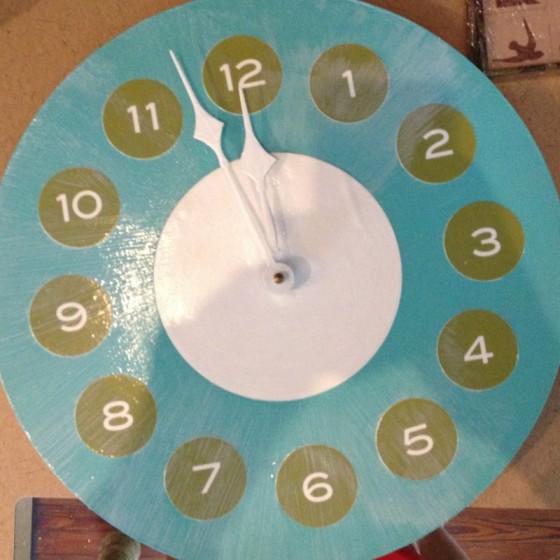 And voila! Our new kitchen clock! With a pendulum! 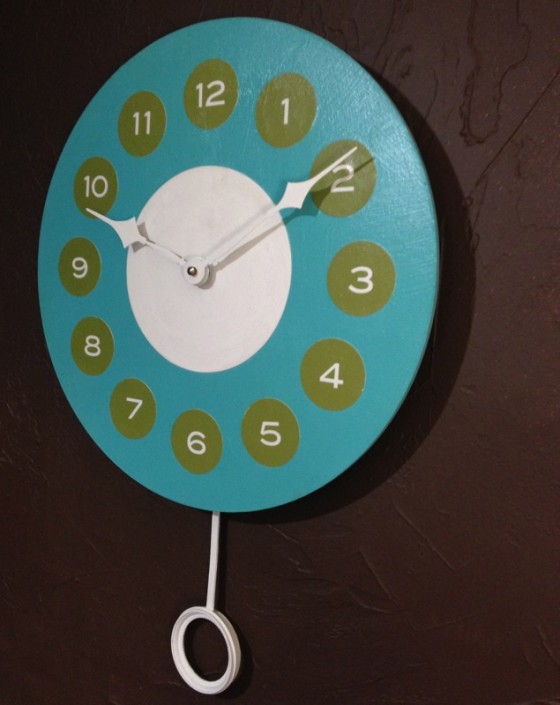 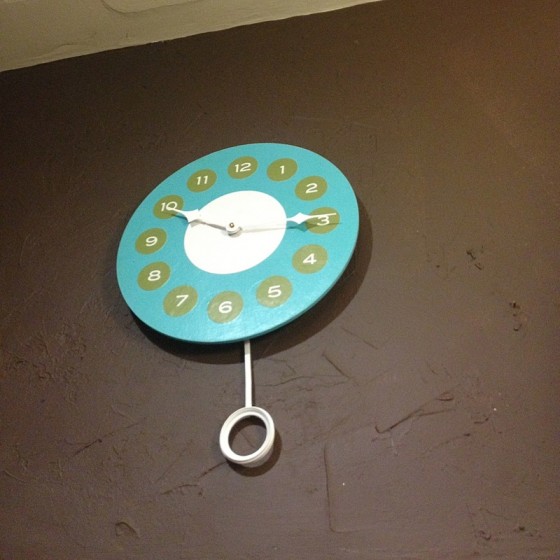 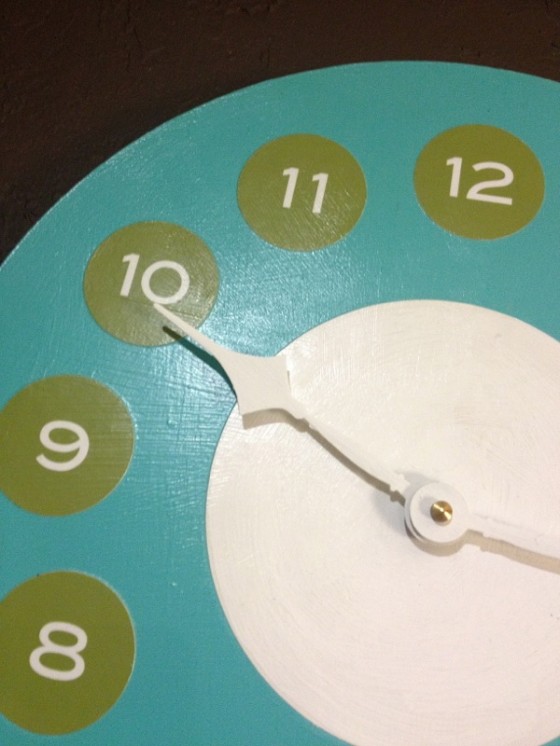 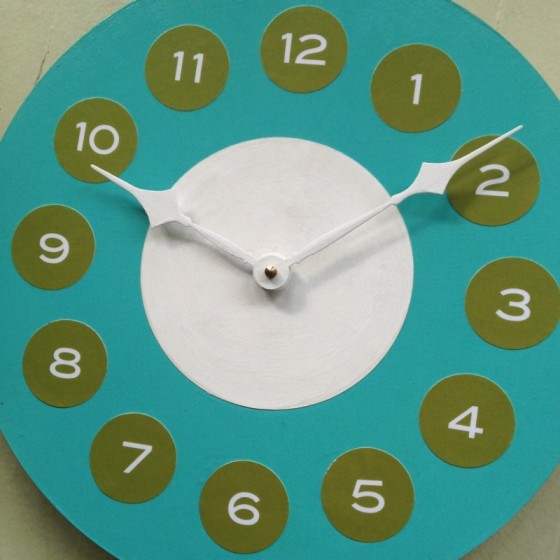 In keeping with my original challenge to myself — stepping away from the screen and making something: one thing per month — I stopped here and counted. And at the end of September, I’m pleased to report that I have actually made TEN THINGS! I’ve got some more to share with you soon, so stay tuned. Until then, YOU step away from the screen and go make something. And share it with us over here on Facebook. 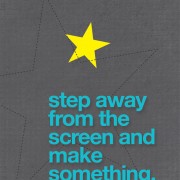 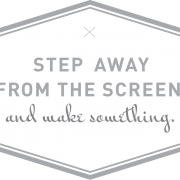 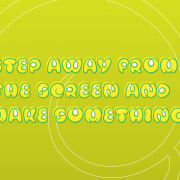 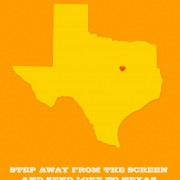 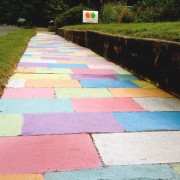 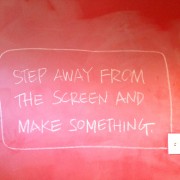 Step Away from the Phone…
Scroll to top