Every year I go to a conference in Salt Lake City called Alt Summit. There’s Alt Winter in January, and Alt Summer in June. I’ve been to every Alt Summit (which began in 2009), but this year was different. This year I attended as Step Away from the Screen, and I got to participate in a new and super exciting way: they asked me to create an art installation for the conference.

Exciting, yes. But intimidating too. Creating a piece of art for this insanely creative gathering of people? How on earth? Not to mention, since I was representing Step Away… I knew I wanted the art to be participatory — something everyone could help create. So not only did it have to be good art, but it also had to be appealing enough that attendees would want to participate in creating it. Simple without being simplistic, creative without being complex, innovative without being overwhelming. No big deal, right?

So I started by focusing on the words Step Away from the Screen and wondered if I could find a literal interpretation of that objective. Suddenly I got it: Pointillism! Lots of dots of different colors which, when viewed from a distance (i.e., you have to step away from the canvas), blend together to form a picture. My idea was that I would create the base art and overlay letters that corresponded to round stickers of different colors. B = blue. R = red. G = green. Etc. People would place stickers on the letters and by the time Alt was over, we will have created a picture. A giant, pointillist  sticker-by-letter picture. 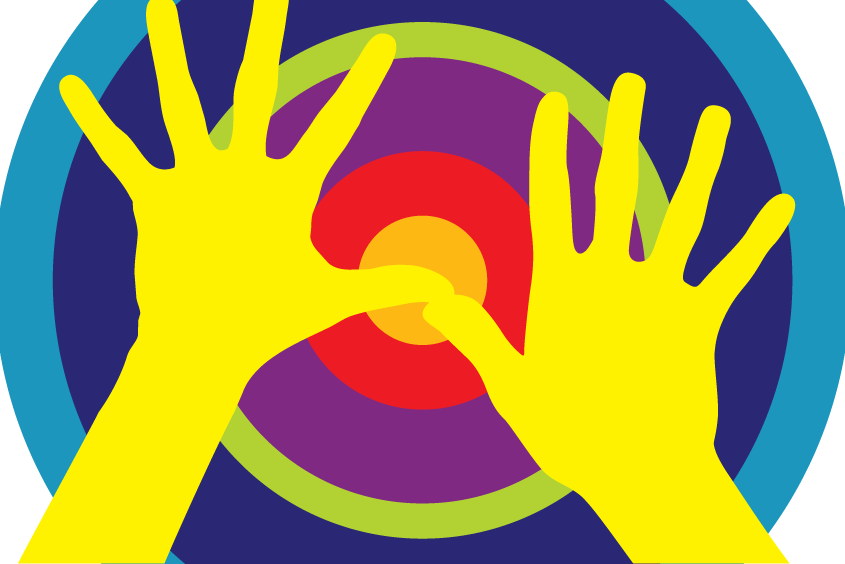 With my concept nailed down, it was time to get started creating a base design. I wanted something that looked cool, but would also represent the message of Step Away… It also had to be simple enough that it could be rendered in 1” dots (which would give it an almost pixelated look). I decided that at the root of the Make Something message was the implication that you are making something with your hands, so my design was focused on hands. That and lots of color! 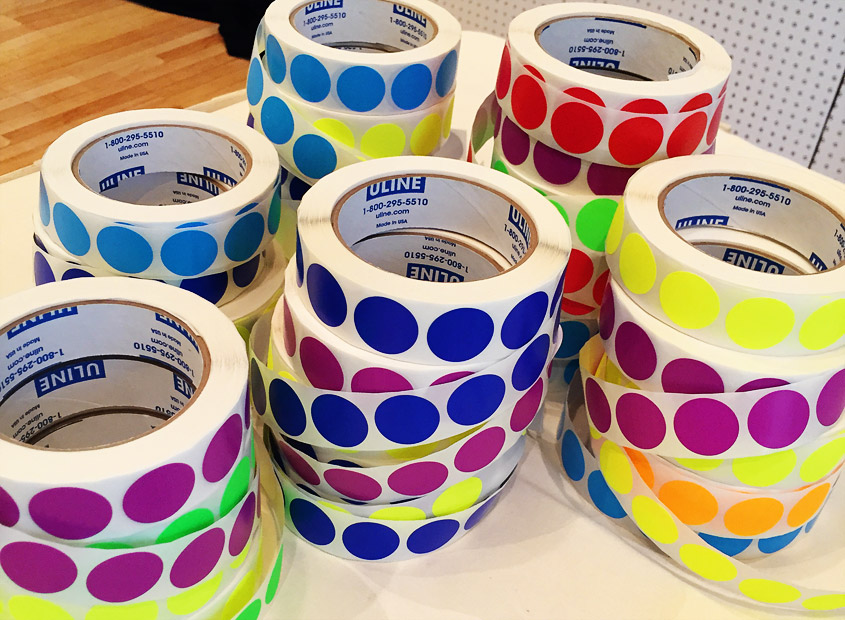 Then I had to figure out how many stickers to order. Which required math. And math is hard, y’all. And it’s summer, so I won’t make you do any. But I will tell you that I ordered almost 30,000 stickers. 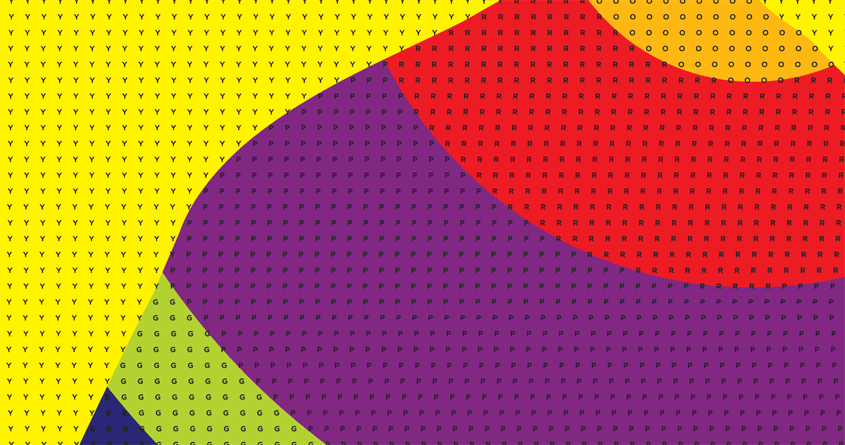 Last but not least, I had to figure out how to overlay the letters in such a way that you couldn’t tell what the base art was. This was the most complicated part. But since I’m a graphic designer I had lots of tools at my disposal. If you’re interested in the nuts and bolts of how I did this, leave a comment and I’ll share. In the meantime, I won’t bore you with those technical details 🙂 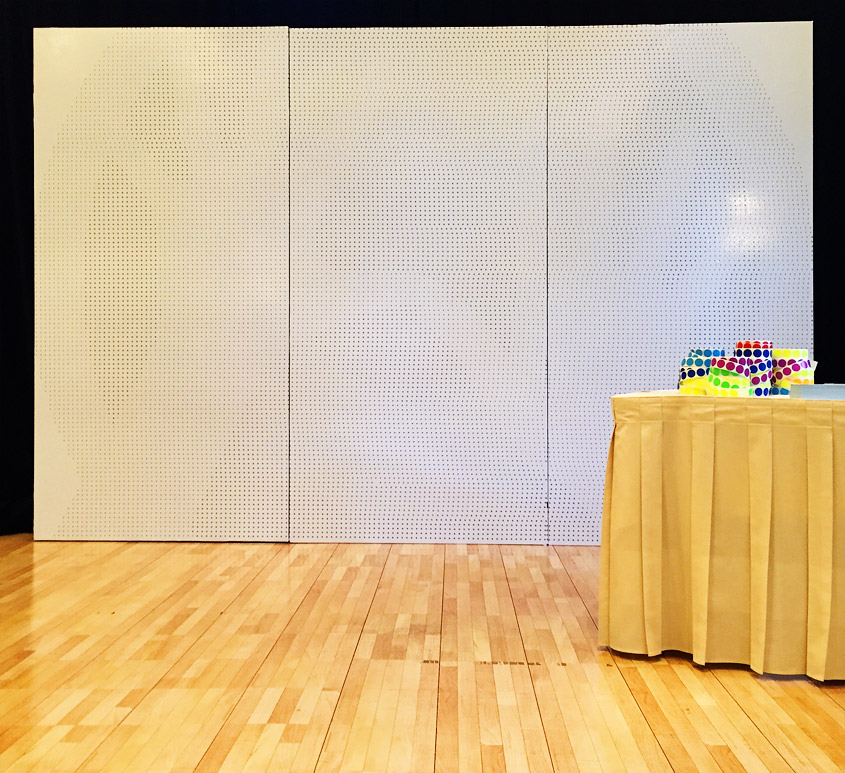 The amazing folks at Cornerstone printed it out on 4’ x 8’ vinyl sheets and mounted the vinyl to 4’ x 8’ wood panels. The final art ended up being 8’ high by 12’ wide. A giant white wall, with tiny black letters. 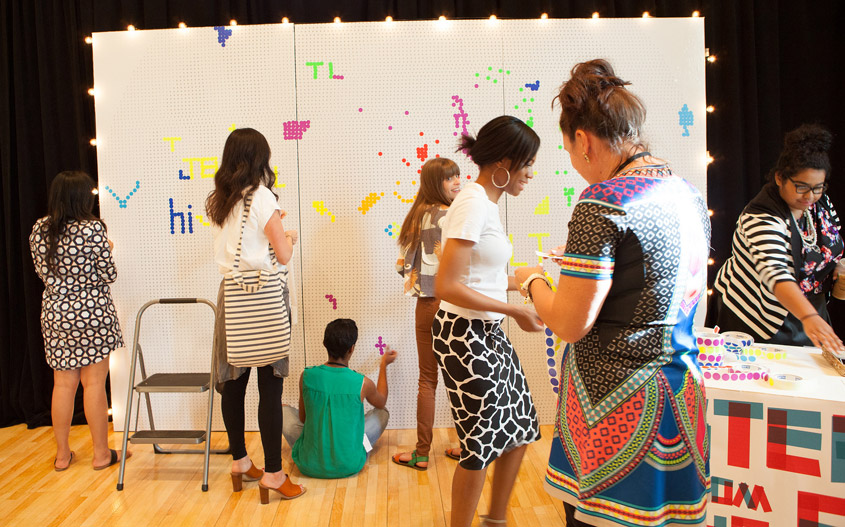 The wall was in the lounge where the attendees spent their breaks between sessions. So it was alternately PACKED FULL OF PEOPLE, or quiet and mellow with just a few folks here and there. This gave me time to chat with one of my favorite people, Alma Loveland from Woven Pear. They set up a cozy bedroom and encouraged you to put on their awesome socks and jump on the bed. Other great sponsors were in there too: Macy’s, Easy Closets, and TagSpire, each with their own cool presentations and installations. Suffice to say, it was a fun room. 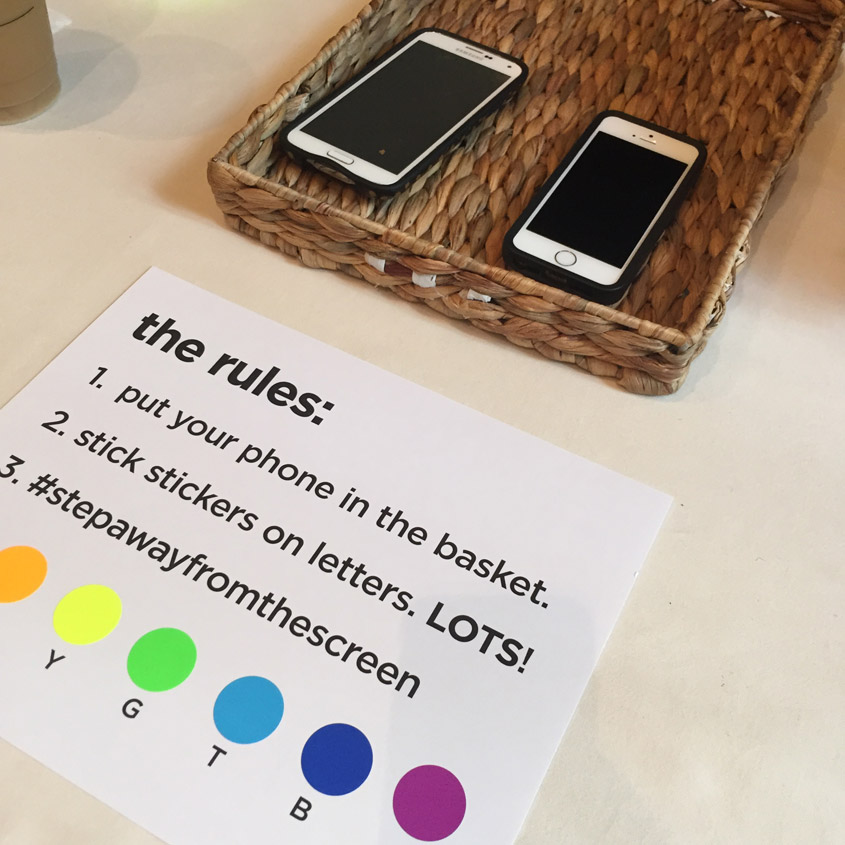 My table was full of stickers of course (although 30,000 stickers isn’t as large a pile as you might expect it to be), and also a basket where you were instructed to leave your phone before you started sticking stickers. I didn’t want you to be up there stickering and receive a text and stop stickering to answer it. No no no!

Once you put your phone in the basket, you were encouraged to grab a roll of stickers and start sticking! 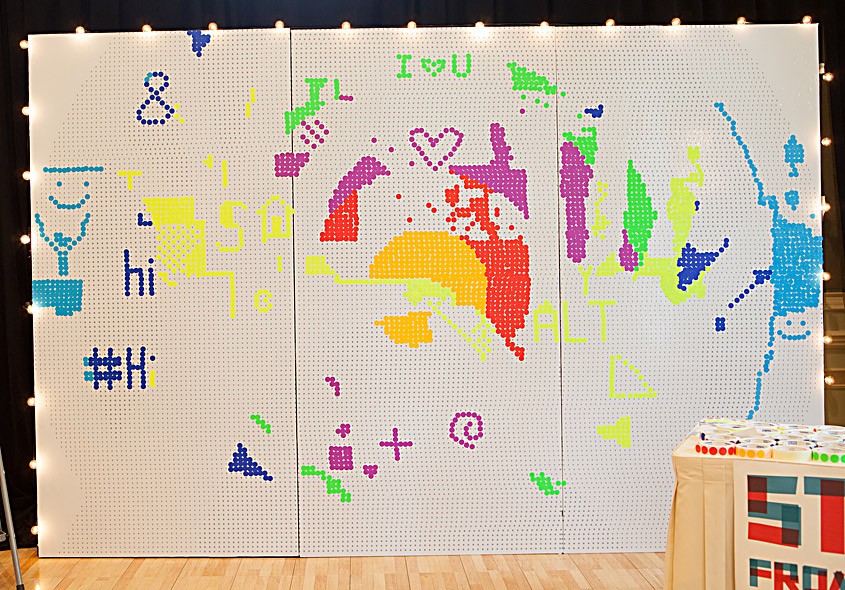 At first folks seemed to be inspired by the wide-openness of the wall, and created designs and words with the stickers.

Some people would stop by throughout the day just to see how we were progressing, and to see if they could figure out what the picture was. 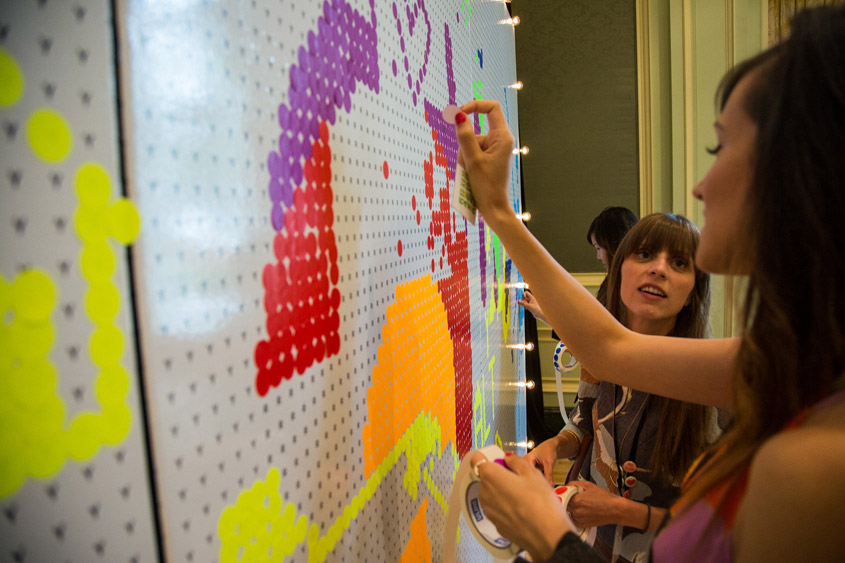 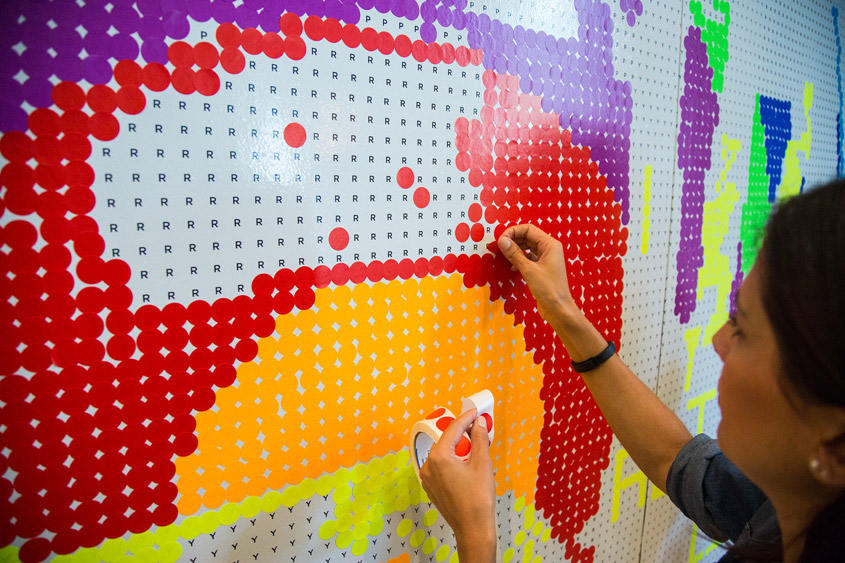 All in all, I was blown away by the response. I had no idea, going in, how the whole thing would play. But it really seemed to be something people enjoyed. Whether it was to take a break from the crazy Alt Energy, or just to recharge and be creative for a few minutes, I really think people had a good time sticking stickers. More than a few times I saw two people reach over and shake hands, and then keep talking while they stuck stickers. Other folks reported therapeutic effects from stickering, and hung out til they felt better. And still others (myself included) found that the wall fed their OCD tendencies. (MUST FINISH THIS SECTION!) Even Guy Kawasaki and his daughter got in on the action! 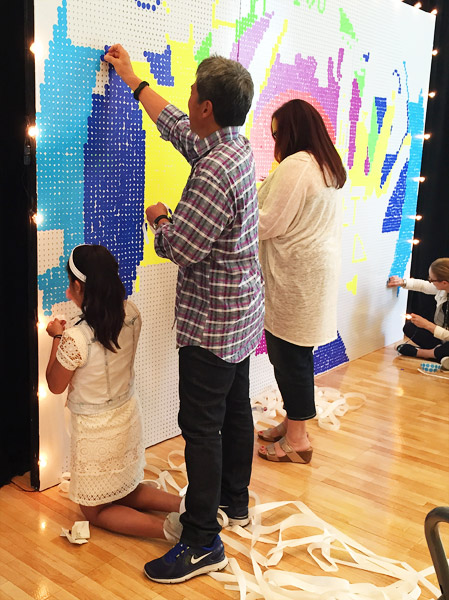 It was really exciting watching it all come together. And by the end of day one, you could really see what was taking shape. 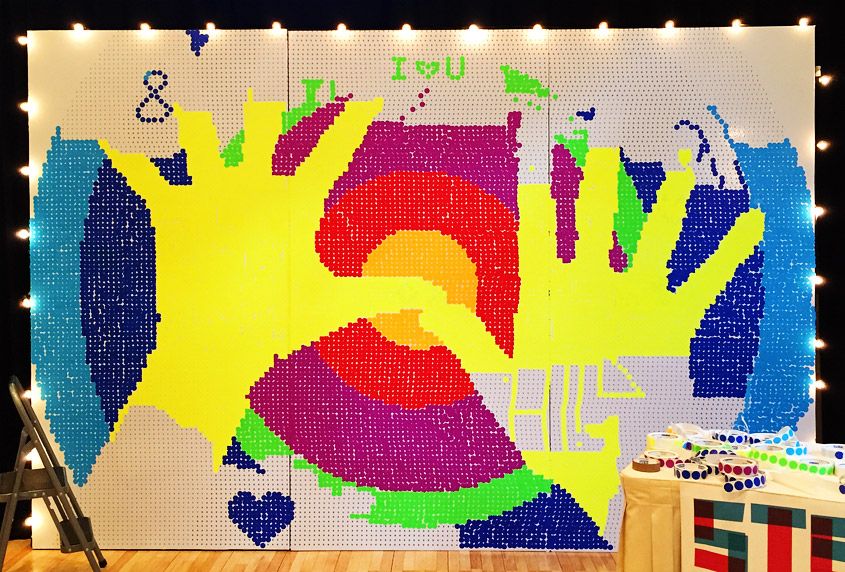 As great as all that stickering was, I also really loved getting to hang out in one place the whole conference and getting to talk to so many people. I got to hear their stories, and what they did, and why they were at Alt, and everything. It was perfect for someone as severely extroverted as I am. I think I got to talk about creativity with just about every person who attended Alt Summer! 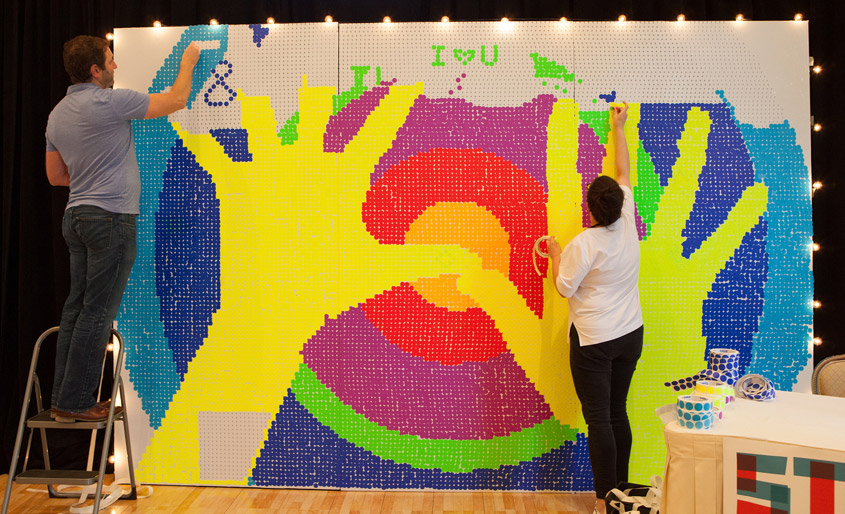 Day two, there was almost a renewed vigor among some people who just wanted to get it finished! And it was a lot of fun watching that happen. People would take on a whole color section and just park themselves there til that section was finished. Total dedication! 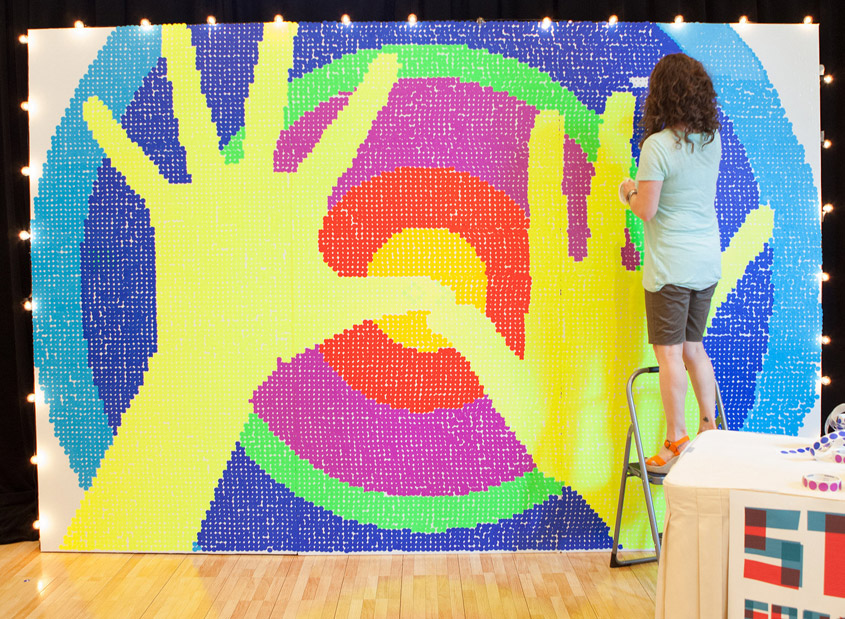 When we finally stuck the last sticker on, at around 2pm, the whole room burst into applause!

It was quite a journey, and I enjoyed every single minute of it. Thanks Alt for being made of magic. And thank you to everyone who helped me step away from the screen and make this come to life. 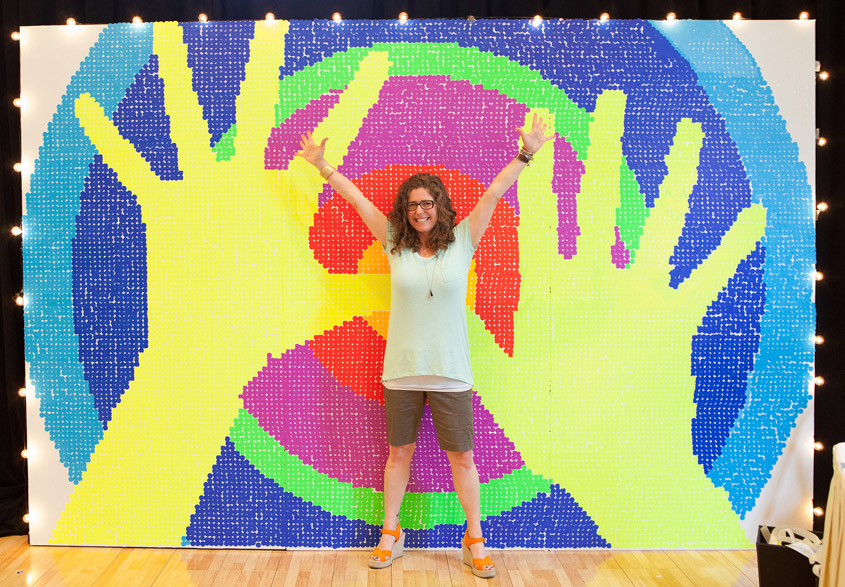 All photos by me or by Brooke Dennis and Justin Hackworth — from the Alt Summit Flickr Stream. 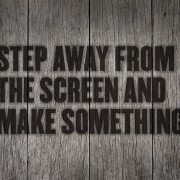 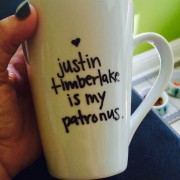 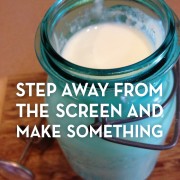 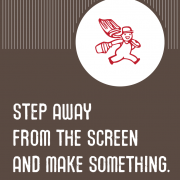 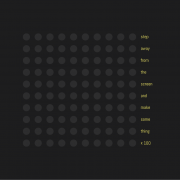 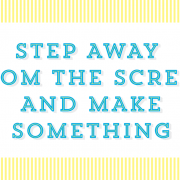